The 2000s were arguably the decade of the internet and social media with names like Facebook, Twitter, and LinkedIn making a big splash in both our economy and culture. So what will be the “it” thing for the next ten years? I believe it is going to be the decade where biotechnology comes into the mainstream. By the end of this decade, we may see people walk into gene clinics to get their DNA analyzed to ascertain their risk for various hereditary diseases. Tests and treatments that run thousands of dollars will be available for a fraction of the cost.

This is not just future talk. Some companies are already there. For example, Illimuna is a company that makes tools that help drug researchers sequence pieces of DNA. The company has grown over three-fold in the last 4 years. The rapid growth of Illumina is the precursor for what is about to happen in the biotech industry.

While many sectors of the American economy were struggling in 2009, the biotech industry surprisingly beat many of the trends. Though many large biotech firms participated in layoffs and downsizing, smaller biotech firms continued expansion and gave the overall industry a boost. 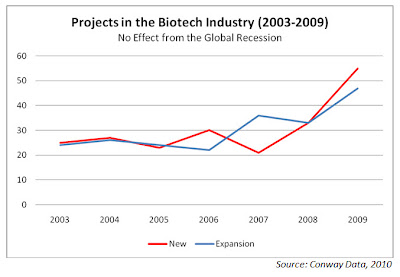 Even more surprising was where these projects occurred. Michigan, with 11 new projects in 2009, led the movement. Draths Corporation, a company that focuses its research on bio-based materials, announced it will open a facility in Okemos, MI with plans to invest over $40 million and create over 200 jobs in the city. Similarly, NephRx, a biotech company engaged in discovery and development of therapeutic products, announced plans to invest $9 million in a 100,000-square-foot location in Kalamazoo, MI as it graduates from the Southwest Michigan Innovation Center located in Kalamazoo.
The following map shows the locations of the projects in 2009. 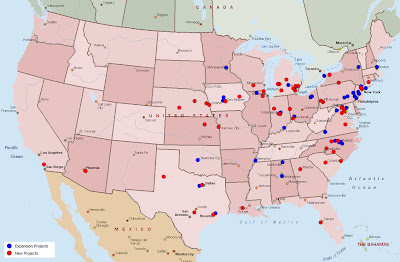 Whittaker Associates also conducted an analysis of biotech firms that have received financing in the first quarter of 2010 and noticed some remarkable trends. In the quarter, 62 private companies raised over $2 billion in financing. Including public companies receiving funding, the number increases to 116 and $3.1 billion.

A vast majority (53%) of the biotech companies that received funding in the first quarter are located in either California or Massachusetts. Some of the other active states include New Jersey, Maryland, New York, and Pennsylvania.

With the level of activity in the industry, the funding that many of the companies are generating both from venture capitalist firms and financial institutions, the biotech industry seems poised for strong growth even in the 2010s. In the coming years, the industry will bring forward new drugs based on new technologies that no one had even thought possible at the turn of this century. What remains to be seen is whether the advent of biotechnology in the 2010s will match the impact of technological shock brought about by the advent of personal computers or the Internet.