In my two years working for Whittaker Associates, most of the economic development projects in which I worked focused on growth through recruiting businesses from outside the region, often referred to as economic hunting. However, in the past few months, I have increasingly heard about the concept of economic gardening, an idea that focuses on providing support to existing businesses so that they can thrive and grow within the community.

Economic hunting can bring massive economic gains to a community. A new project can bring hundreds of jobs and create big headlines. However, the hunting process is time consuming, uncertain, and costly. In many cases, the companies attracted to a community are driven solely by costs and incentives. Once the labor costs start rising and some other community offers the company a bigger wad of cash, the jobs can disappear quickly. In this global market where communities in the United States are competing directly with communities in China, India, or Mexico the idea of gardening seems to be slowly gathering steam as hunting loses its appeal.

The concept of this entrepreneurial approach to economic development was first pioneered in Littleton, Colorado in 1989. Economic gardening focuses on creating a nurturing environment to support the growth of local entrepreneurs rather than recruiting businesses form elsewhere. This is not a business incubator program, but rather a support structure for companies that have moved beyond the startup phase. The programs intend to support the so-called second-state companies that have been around for about five years and have more than a million dollar in sales. The program usually focuses on companies with around 10 to 100 employees. It is believed that once companies hit the 100 employee mark they tend to hire professional managers who can then guide the company’s growth without much external support. For more on how the concept involved in Littleton, Colorado click here.

According to the Edward Lowe Foundation, a Michigan based non-profit group that assists entrepreneurs, second-stage companies accounted for about 37 percent of the jobs in the country in 2007. On the other hand, stage-three (100-499 employees) and stage-four (500+ employees) companies, the targets of the economic hunting process, accounted for just 15.4 percent and 12.9 percent of employment in 2007.

We became interested in seeing whether the supporters of the concept of economic gardening were right. We wanted to check whether these companies that claimed to have the potential to grow did in fact grow in the following years. Therefore, we conducted a current analysis of these 50 companies and verified that 28 of the businesses did in fact grow in employment. Overall, the group’s total employment grew from about 1,650 to over 2,000 employees, a growth of approximately 25 percent. 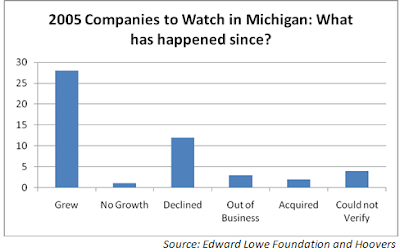 It is certainly astonishing that such a large majority of the companies were successful given how badly our nation’s economy, and in particular, Michigan’s economy, have performed in recent years. The company that grew most, in terms of percentage growth, was a small medical device manufacturer that grew from 10 employees in 2004 to 65 in 2009. It is interesting to notice that a number of IT Services and Software companies featured on the positive side of the spectrum. In fact, the ten fastest growing companies features three medical device companies and four IT services companies.

Given such number, the interest in economic gardening appears to be justified. With many large corporations downsizing or moving jobs overseas, many economic development professionals are looking for alternatives and the answer appears to be in their own backyard.

Here is the map of the 50 companies from the Edward Lowe Foundation’s 2005 Companies to Watch showing the locations of the companies that prospered and those that declined. 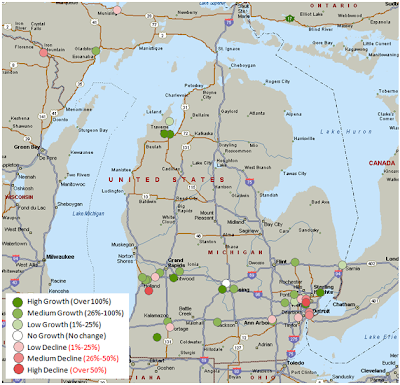