Smart-Grid Technologies: Not so 'dumb' network

With expected gross revenue of $25 billion in 2009, smart-grid systems manufacturers and solution providers are among the fastest growing companies in the GreenTech world. A recent study conducted by Deloitte estimated that smart-grid technology could potentially increase the efficiency of electricity transmission from 33 percent that is currently achieved by using legacy electricity grids to about 60 percent. Deploying smart-grid technologies could reduce our electricity consumption by about 30% and reduce the level of greenhouse gases in the atmosphere.

Broadly speaking, a smart-grid system adds computer intelligence and networking to what is otherwise a ‘dumb’ network. According to the Smart Grid Systems Report, published by the U.S. Department of Energy in July 2009, a smart-grid system is defined as a system that uses digital technology to improve reliability, security, and efficiency (both economic and energy) of the electric system from large generation, through the delivery systems to electricity consumers and a growing number of distributed-generation and storage resources.

Smart-grid technologies could be used to help a power generation company run cleaner power sources such as nuclear, hydro, solar or wind, at full output, 24-hours a day, while reducing the need to provide more carbon emitting gas, coal, or oil plants in a surge (usually for only a couple of hours per day), to meet peak demand. By reducing the variability in power, smart-grid systems can diminish the need for new power plants.

The increase in interest and the demand of electric vehicles, including plug-in hybrids, will not only lead to major changes in the nature of the transportation industry, but it will also have a tremendous impact on the way we use electricity. Today only 0.02% of light-duty vehicles are grid-connected, but forecasts estimate ultimate penetration of this market at 8-16%, with some aggressive estimates at 37%, by 2020. To support such a massive rise in demand for electricity, a bi-directional informational flow supported by a smart grid system is necessary.

According to the Department of Energy study, only 4.7% of all electric meters are smart meters. Approximately 52 million more meters are projected to be installed by 2012. As a result, companies with new smart-grid concepts and technologies are receiving significant injections of capital. Venture-capital funding of startups in the sector grew from $58.4 million in 2002 to $194.1 million in 2007, yielding an average annual rate increase of 27%.

The Deloitte study estimates that smart grid companies may generate revenues over $25 billion in 2009, representing the biggest and fastest growing sector in GreenTech. In late 2008, during the depth of the recession in the United States, smart-grid solutions providers were enjoying 50% revenue growth and an 80% increase in bookings.

Whittaker Associates identified 41 companies directly involved in smart-grid business with revenues totaling $5.6 billion in 2008. Like many other GreenTech sectors, California has the highest concentration of smart-grid businesses. However, the number of companies and their sizes are growing in states like Washington, Georgia, New Jersey, and Pennsylvania. The map below shows the location of these 41 companies in the United States. 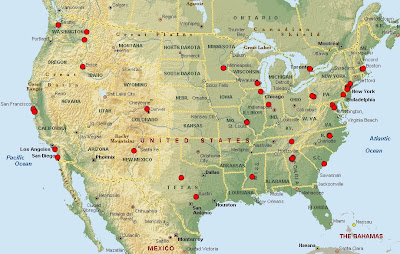 The public sector is also slowly catching up with the private sector in the area of smart-grid investment. In April 2009, the National Institute of Standards and Technology, a measurement standards laboratory under the U.S. Department of Commerce, announced a three phase plan to expedite the development of key standards for a Smart Grid, a nationwide network that uses information technology to deliver electricity efficiently, reliably, and securely. Under the American Recovery and Reinvestment Act, the federal government plans to distribute more than $3.3 billion in smart-grid technology development grants and an additional $615 million for smart-grid storage, monitoring, and technology viability.

For further information please refer to these sources: